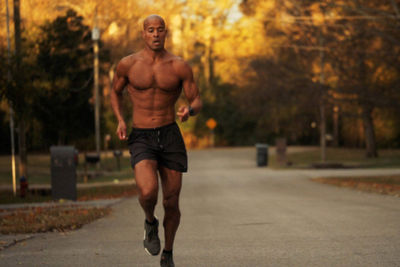 I first heard about David Goggins when I was traveling with my brother. We went from one city to another and decided to pass the time by listening to podcasts. He brought his playlist, and I brought mine. We first heard to mine, which was heavily focused on issues regarding science and the current climate of the research industry. His was a recorded interview with the ultramarathon runner himself. Suffice to say, and I wasn't prepared to listen to a motivational speech in the middle of nowhere with mountains surrounding us on both sides. However, as I began to listen, I started to understand the hype around him and why my brother insisted we listen to the podcast in the first place. Goggins is legendary, in the most fantastic sense of the word.

David Goggins, an athlete, speaker, and soldier, is recognized as the most complex and most substantial man on the planet. Everyone believes he is Superman, but he used to be tearing himself apart internally. In a documentary video with Goalcast, he opened up about these struggles and has been open about why he feels compelled to voice his mind now. We will talk about it more later on.

He is also a seasoned endurance athlete who has competed in over 60 ultramarathons, triathlons, and ultra-triathlons, routinely setting new course records and ranking in the top five. He once held the Guinness World Record for the most pull-ups completed in 17 hours, with 4,030, and he's a popular public speaker. Goggins has spoken his tale to hundreds of thousands of children around the country and various professional sports teams, and Fortune 500 executives. One of his most famous quotes talk about the importance of mental health:

"Do a live autopsy, go back in your brain, crack it open and figure out why the scars are there, don't wait until you are dead for an autopsy, do it while you are alive."

David Goggins grew up in a fearful environment. He was subjected to constant bullying and racism at school. He was subjected to physical and emotional abuse by his father at home. By the time he was in his early twenties, Goggins had asthma, a learning handicap, a stutter, and a crippling lack of self-esteem. He was spraying for insects for less than $1,000 a month. Goggins endured unspeakable adversity, yet he utilized it as fuel to achieve his full potential. He provides a grim picture of his boyhood in this memoir justifiably titled "Can't Hurt Me," marked by poverty, prejudice, and physical violence. It describes how he overcome a lifetime of adversity to become emotionally and physically indestructible. To develop his mind and physique, Goggins has gone through the inconceivable. He discusses his abusive past, shows his belief in the dark force of suffering, and explains how to become pain-free.

It's no surprise that Goggins is pretty big on mental health. He advocates for better physical and mental health practices and is pretty much the leading face for getting through tough times. But there's a good reason behind why he is so open with his struggle. It is a mixture of the life he's lived and the work he's done on himself to become a better version of himself. A better individual. Someone he can be proud of. Goggins believes that authentic confidence comes from doing difficult things and taking the path of least resistance. Many of us, according to Goggins, desire the outcome without the process. We often overlook the fact that pain is essential for advancement. How do you win the mental battle? Goggins explains why it's vital to focus on your deficiencies rather than your strengths and why he doesn't believe "positive self-talk" is beneficial.

Goggins refers to performing a live autopsy as an examination of your life, ideas, feelings, and deeds.

Negative emotions and thoughts. Fears. Anxiety. So many of us have unconscious things that get in our way and undermine us, preventing us from really living our lives. Most of the time, we are either unaware of them or accept them without questioning their source or veracity. "That's just who I am," many of us remark, but is it? Is it really who you are, or is it just who you've accepted yourself to be because it's what you've been told or because it's easier?

This is referred to as introspection in psychology. It's when you stop allowing your thoughts and feelings to control you. Instead, you study yourself to see why you think and feel the way you do and, if required, how you may change it.

"On the other side of suffering is a whole different world,

that's where you find yourself."

Why don't people undertake more living autopsies and introspection? Because it can be excruciatingly unpleasant. You can deceive others, but when it comes to telling the truth to yourself, you might be terrified of what you'll have to face to cease living inauthentically.

We must quit believing the negative thoughts and emotions that flood our minds and question what we think about ourselves because it is often all a lie. We've all been brainwashed to some degree, but the good news is that we have the power to free ourselves!

Journaling is frequently mentioned as a means of introspection, self-care, or digesting thoughts. There is often much more outside of the therapy hour, depending on how much time you spend in therapy every week. We can quickly become distracted from the session's insights and benefits by the routine things we have to complete, the people we meet, and the greater responsibilities we confront. Journaling has beneficial effects for people who suffer from anxiety or PTSD.

"The most important conversation you have in your f**king

life is the one you have with yourself."

Journaling is an effective way to stay engaged with the restorative material. Bringing a diary into therapy and bringing it outside has been shown to help increase treatment gains and offer

opportunities for improvement outside of the therapy hour. Journaling can take numerous forms and does not always have to be written down. Journaling might take the shape of doodles, drawings, and sketches for those who are more artistically inclined.

Those who are poets can put together a meaningful verse that speaks to us. Oral, written, or even physical journaling are all options (in unique ways). There are no rules; the goal is to engage with yourself on an introspective level and see what material emerges. There's nothing to be ashamed of.

Let's face it: looking at photographs or tweets on social media is fun and occasionally useful, but we are overusing it for our own good. Last year, the average amount of time spent on social media per person was 136 minutes per day, and concerns about the potentially harmful consequences have grown. Instagram is even experimenting with a new function to address these concerns.

Goggins houses the same problems. He believes that while being a great platform to express yourself in, it's also a place of hate and haters that will troll you for doing the things you love. He believes in taking a break from social media every now and then in order to cleanse yourself and focus on what makes your content.

Forget Your Phone, Buy a Journal

If you travel with a smartphone, you're likely to see the majority of your life through the prism of social media. It's easy to spend a significant chunk of your day thinking about how you'll document and promote it online, from photo-ready meals to Instagram-friendly architecture. Here's how to change the way you think about your situation. There's nothing wrong with taking images with an audience in mind or sharing your experiences on social media. Social networking is an excellent method to interact with others and share memorable events to reminisce about later. On the other hand, keeping a journal is a more in-depth approach to engaging at the moment.

The idea of planning and chronicling your life becomes a private activity when you journal. You generate material for yourself rather than share it with the rest of the world. It's a whole different experience than uploading many images on Facebook, and for some people, it's even more fulfilling.

To make things easier, with JournalOwl, you can now keep a daily online journal. Orienting stuff in the right direction, you will be able to journal your thoughts on the go! Start by signing up and taking the reigns of your life!