Can Chronic Stress Cause Nocturia? 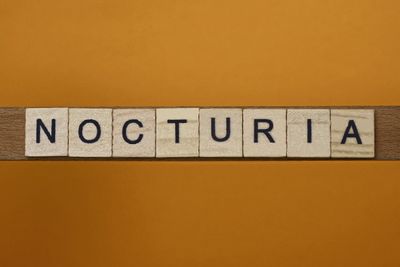 If you're someone that wakes up a lot in the middle of the night to go to the bathroom to relieve yourself, you are probably an unthought-of victim of nocturia. Honestly, it sounds like a character from a comic book, but I promise you it's not. It's a natural condition that affects 50 million people in the United States, with 10 million people diagnosed, but only 1.5 million obtain treatment. One in every three adults over the age of 30 goes to the bathroom at least twice a night, and roughly 70% of these people are upset by it.

In most cases, the amount of urine produced by your body reduces during the night. Most people can sleep for 6 to 8 hours without having to go to the bathroom. However, some people get up more frequently during the night to urinate. This has the potential to alter sleep patterns and more. Hence, in addition to the difficulty it causes, nocturia is linked to long-term sleep deprivation.

The Harmful Effects of Nocturia on Health

Nocturia is commonly associated with an overactive bladder caused by urinary tract infections or other illnesses. Approximately half of the individuals who have urine urgency throughout the day also have nocturia. Those with three or more nocturnal gaps per night have a far greater overall mortality rate than the general public.

Nocturia impacts overall health and daily functioning. A lack of sleep is a significant risk factor to falls and injuries at night, diminishes the quality of life and productivity, and may even impact the partner's health, whose sleep is frequently disrupted.

Seniors with nocturia who make frequent nocturnal excursions to the restroom have a significantly higher risk of possibly serious falls. Overnight falls account for a fifth of all falls among the elderly. Twenty-five percent of these are directly related to nocturia. Patients who go to the bathroom at least twice a night have a more than doubled risk of fractures and fall-related injuries. Sleep deprivation caused by nocturia can result in exhaustion, mood swings, somnolence, decreased productivity, fatigue, lethargy, inattentiveness, and cognitive impairment.

Despite its prevalence, nocturia is frequently under-reported, poorly managed, and untreated. Many people are hesitant or ashamed to tell their doctors about their problem or incorrectly feel it is a natural aspect of growing older. To make matters worse, physicians' initial treatment of nocturia is often superficial and conventional, regardless of the underlying problem at hand. Men are typically prescribed alpha-blockers, a type of blood pressure medication, while women are prescribed hyperactive bladder drugs with no comprehensive diagnostic evaluation.

Even when these early efforts fail, further examination and therapy of nocturia are frequently absent.

Some Common Causes of Nocturia

If you drink too much fluid in the evening, you may wake up more frequently to urinate. Caffeine and alcohol consumption after supper can also contribute to this issue. Other typical reasons for nighttime urination include:

Other factors that may contribute to the situation include:

Chronic Stress – A Hidden Cause of Nocturia

Previously, I mentioned that nocturia might often be misdiagnosed or entirely disregarded by the patient as something normal—one of the reasons being that it can even be caused by chronic stress. In fact, the link between chronic stress and nocturia (and ultimately, anxiety and depression) is so unknown that often it may turn out to be just that. Hence, all those tips regarding not drinking before bed or treatments of other kinds may be considered unnecessary.

People with overactive bladder (OAB) are more likely to suffer from mental health issues such as anxiety and sadness. For some people, frequent urination and the possibility of bladder leakage might be distressing. According to research, approximately one-half of persons with OAB have anxiety symptoms, with nearly one-quarter having moderate-to-severe anxiety. Those who suffer from stress due to OAB are also more stressed and depressed than those who do not.

I'm going to present you with two reasons why anxiety and stress can have a direct link to your bladder.

The first reason is that stress triggers the fight-or-flight response, which makes the neurological system more sensitive. Basic reflexes such as bladder voiding can become more easily activated in patients with OAB due to stress. People with OAB may be concerned about developing symptoms, particularly in social circumstances, which might trigger their fight-or-flight reaction. This reaction can subsequently lead to OAB symptoms, resulting in a vicious cycle in which the more symptoms a person experiences, the more nervous they get.

The second argument is that anxiety and stress generate muscle tension, affecting bladder muscles and increasing the desire to urinate.

Hence, inadvertently, anxiety and sadness have also been linked to nocturia. Some experts feel this is related to sleep issues, typical in persons who suffer from anxiety and depression. They claim that these people use the restroom more frequently simply because they are awake for more extended periods of time.

In a reverse effect, nocturia can also end up causing depression leading to more stress and anxiety.

The most important thing to keep in mind is that nocturia can only be addressed if the underlying reason is adequately discovered and treated. This article is centered on chronic stress as a cause of nocturia. Hence, we will be providing treatment options that you can do yourself at home to calm down your stress and anxiety, and in succession, treat or manage your nocturia.

Yoga, prayer, guided imagery, mindfulness meditation, and deep breathing are some of the relaxation techniques that have been demonstrated to reduce the effects of chronic stress. According to a study, these activities lower cortisol levels.

How you respond to stress and anxiety is influenced by what you eat. According to research, the more people consume a Western or highly-processed diet, the higher their risk of depression and anxiety. Those who eat a Mediterranean diet, consisting primarily of fruits, vegetables, fish, and healthy fats, are less prone to acquire mental illnesses. You may also want to control your consumption of alcohol and caffeine as they tend to exacerbate symptoms of stress and anxiety.

Regular exercise, according to research, can help keep cortisol levels in balance. Even short bouts of regular activity can lower stress levels and improve cognitive performance in those who have been facing stress problems for a long time. As a result, doctors advise patients suffering from chronic stress to get easy exercise every day, such as a 20-minute stroll.

I also offer cognitive-behavioral therapy (CBT) as a treatment option. CBT is a tool that we employ to assist patients in recognizing negative thought patterns that contribute to chronic stress. The one true goal is to help people change their stress-related behaviors, thoughts, and feelings into more realistic and helpful ones.

As my last treatment option, I suggest you keep a daily online journal. Journaling daily has proven to help alleviate symptoms of stress and anxiety and is an excellent source of clearing evil thoughts that frequently accompany them. Journaling before sleeping is a great way to de-stress, making it less likely for you to wake up to alleviate your bladder. People who suffer from nocturia also keep "bladder diaries," keeping track of their bathroom movements. You can incorporate that into your journal and a way to kill two birds with one stone.

To reiterate what I mentioned before, if you think you are suffering from nocturia, do not discount chronic stress as a reason. Knowing the proper reason will be beneficial to your treatment.