Can Dementia Cause Depression in the Elderly? 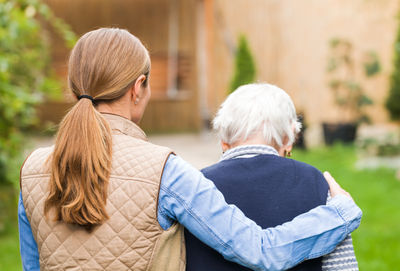 Depression is not a symptom of growing older. Essentially, the older you are, the more relaxed life should be. Your 20s, 30s, 40s, and 50s are for learning, being challenged, and building up your lifestyle and personality. Your older years are to sit back, relax, and reflect on the life you've lived. Unfortunately, many people may start showing signs and symptoms of depression as they grow older for a myriad of reasons. This isn't a normal occurrence and should be treated with utmost seriousness.

Depression is a severe mental condition that affects many people. It has the potential to influence how you feel, act, and think. Despite having more illnesses or physical problems than younger people, research reveals that the majority of older people are satisfied with their lives. You're more prone to experience depression as an adult if you've had depression as a child or a teenager. It is more common in older persons, and it frequently occurs in conjunction with other medical issues and disabilities, lasting longer.

Medical conditions like Alzheimer's, cancer, diabetes, and dementia can cause depression in the elderly. For the sake of this article, we'll be focusing on the causes of depression linked to the onset of dementia.

Dementia is a symptom defined by a decline in cognitive function (i.e., the ability to process thoughts) that goes beyond what would be expected due to biological aging. Memory, cognition, orientation, comprehension, computation, learning capacity, language, and judgment are all affected. The state of consciousness is unaffected. Changes in mood, emotional control, behavior, or motivation are frequently associated with and occasionally precede cognitive impairment—for example, depression. Dementia is not a regular aspect of aging, even though it usually affects older people.

Dementia is a generic word for a loss of capacity to recall, think, or make judgments that interfere with daily tasks. It's not a disease in itself, but it is a symptom of other diseases like we mentioned before. Alzheimer's disease causes the most frequent form of dementia. Alzheimer's and associated dementias have a variety of causes, depending on the types of brain alterations that are occurring. While some brain abnormalities have been linked to some forms of dementia, the fundamental reasons in the majority of instances are unknown. Rare genetic alterations have been linked to dementia in a tiny number of persons.

Signs and Symptoms of Dementia

Because dementia is such a broad word, the symptoms can differ significantly from one person to the next. You can detect dementia in members of your family by looking for the following signs:

Dementia patients struggle with issues of:

The symptom that we are interested in discussing further is depression.

Can Dementia Lead to Depression?

According to research linked between dementia and depression, in older persons, depressive symptoms are highly prevalent. Sustained and incapacitating major depressive episodes, on the other hand, are more likely in dementia patients than in people of the same age without dementia. Depression can affect up to 30% of people with vascular dementia (a type of dementia) and Alzheimer's disease, and up to 40% of people with dementia caused by Parkinson's and Huntington's disorders.

For a long time, researchers and physicians have been debating the link between depression and dementia. Depressive symptoms are among the first signs of brain dysfunction that lead to dementia. Depression, according to some studies, promotes inflammation and other chemical changes in the body, potentially raising the chance of dementia later in life. Everyone agrees that the combination of depression and dementia causes more significant pain and difficulties than either condition alone.

Because dementia and depression share similar symptoms, identifying depression in someone with Alzheimer's can be challenging. The following are some of the signs that are common to both depression and dementia:

Importance of The Right Diagnosis

When dementia is accompanied by depression, recognizing and treating it can potentially improve the patient's and care partner's lives. Finding depression, on the other hand, is not always straightforward. Other illnesses produce symptoms that resemble depression, leading to confusion among family members and professionals. Low thyroid, some malignancies, and sleep apnea can cause depression-like symptoms, diverting attention away from a medical problem requiring care. Another recent study emphasized the necessity of addressing controllable aspects in a patient's living situation. Physical pain and social isolation, for example, are critical causes of depression in cognitively challenged people and can be treated.

Apathy, as well as a lack of initiative and motivation, are prevalent dementia symptoms. In patients with dementia, apathy is much more common than depression, but it does not respond to antidepressant medication in the same manner. In truth, several antidepressants can cause apathy, although a caring clinician can overlook this risk in someone who is withdrawn and tired. Because apathy isn't often associated with unhappiness or suicidal thoughts, Owen's remark about ending his life shows that depression, rather than apathy, may be the culprit. To explain with an example, let's talk about a specific diagnosis.

There is no single test or questionnaire that can be used to determine whether or not someone is depressed. Diagnosis necessitates a comprehensive examination by a medical practitioner, especially since pharmaceutical side effects and other medical diseases can generate similar symptoms.

The following items will be included in a depression assessment:

Because diagnosing depression in someone with Alzheimer's disease can be difficult, it's a good idea to talk to a psychiatrist who specializes in recognizing and treating depression in older people.

Treating Depression in Conjunction with Dementia

The most typical treatment for depression in Alzheimer's patients is a combination of medication, counseling, and gradual reconnection to activities and people that make them happy. It's rarely helpful to advise someone with Alzheimer's to "cheer up," "snap out of it," or "try harder." Depressed people, whether they have dementia or not, can rarely improve without a lot of support, reassurance, and expert care.

If a loved one is going through this, there is a list of things you can help them do to combat it:

However, another way to get your loved one on medication needs to be parallel with all of the other treatment options above. Antidepressants come in a variety of forms to treat depression. Selective Serotonin Reuptake Inhibitors (SSRIs) are antidepressants that are frequently used for persons with Alzheimer's disease and depression because they have a reduced risk of interfering with other drugs than other antidepressants.

Always ask about the dangers and advantages of any drug, as well as what kind of monitoring and follow-up would be required.

A final point to consider when it comes to dementia and depression is the care partners of dementia patients. Caring for others is a hard job that puts the caregiver at risk of depression. According to a recent study, more than two out of three carers scored high on a depression test. Older caregivers who had a lower educational level or had less support from other family members had a higher risk of depression. Hence, as a caregiver, it is essential to look after your health.