Does Smoking Mask Anxiety and Depression? 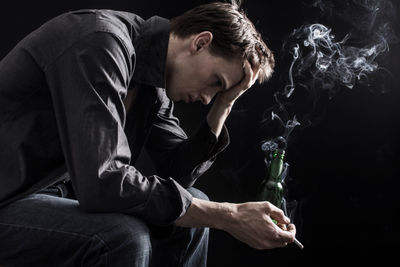 Fifty million people in the United States are currently addicted to nicotine. That’s fifty million packs of cigarettes or tobacco products a day that these people are consuming, setting aside their regards for their health. We know all the bad stuff that comes with smoking. For example, the chances of getting a heart or lung disease increase with smoking and passive smoking. We’ve seen the horror show clips of people suffering from some form of mouth or face cancer in hospitals regretting ever picking up a cigarette in the first place. There are even warnings on the labels themselves. So why, despite the billboard-sized “Say No to Drugs” and signing up for detrimental health, do people continue to smoke?

During its recent discovery, tobacco use was widespread in Native American rituals and cultural ceremonies due to the effects of nicotine on the mind. Tobacco was smoked in long rolls pre-ceremony and was believed to be a gateway for higher spirituality. The use of nicotine in Native history takes on a similar journey to ayahuasca, peyote, or other psilocybin substances to come out from the Americas. Like these mind-altering substances, nicotine was also used for medicinal or healing purposes – a notion that is again becoming popular.

The Europeans were first introduced to tobacco in the 16th century, where it quickly became a status symbol and was branded as an item of luxury. Only the most affluent could either smoke or sniff or stuff tobacco products. The Europeans believed that tobacco could cure anything, blissfully unaware of its ability to blacken a person’s insides. Cut to today – where six million deaths are caused each year because of tobacco consumption.

How is Nicotine Addictive?

Technically, it’s not cigarettes or tobacco we become addicted to. It’s nicotine. Nicotine is an alkaloid as addictive as heroin or cocaine. There has been extensive research on the effect of nicotine on the brain and the natural chemical system of hormones. Nicotine is a stimulant drug, such as cocaine or coffee. Although, people have reported that they might experience a drop in their behavior after smoking. Not unlike the chemical effects of alcohol, nicotine is also viewed both as a stimulant and a depressant.

We know that nicotine has an effect on our lungs and heart, but what you may not realize is that it also affects the brain enough to cause long-term dependency. Nicotine is similar to many other neurotransmitters in the body. As soon as it reaches your brain, it can elicit a response from the dopaminergic pathways and raise dopamine levels. This rise in dopamine levels can cause a person to feel more relaxed and calm. With each puff, you start feeling good, which means your brain starts to owe more to nicotine and signals to let more in. This is the simple reason nicotine is addictive.

People that smoke regularly has admitted to feeling calmer, more focused, and happier. It is known to improve mood. Since it is quick to reach the brain, with effects draining after a couple of minutes, it becomes the optimum reoccurring minor dopamine hit for people feeling tensed or under a stressful situation. Nicotine also helps to temporarily improve memory and suppresses appetite. Research is still unclear whether it is the withdrawal or the want of dopamine that brings a person to their next puff. Either way, the end is elevated levels of dopamine and mimicked joy. Not the best solution to working through problems, but a pretty good explanation of why nicotine is so addictive. Just FYI, vaping is not a better option either.

Smoking the Sadness Away

A cigarette in hand is like a bullet in the gun, a trigger just waiting to be pulled. Still, why do we pick up this habit? If you’re a smoker, ask yourself your favorite thing about smoking. The answer will probably be that it makes you feel more confident, relaxed, and more alert. For many people, the habit is picked up on the way to exiting adolescence and entering adulthood. However, most people start smoking when they’re teenagers. If you are going through your teens or have been through them, you’ll understand the daily life stresses we face when we’re younger. Teenagers are just bean bags filled with anxiety waiting to burst – which is not unnatural. Given the mess of hormones that regulate our lives as teenagers, we often find ourselves unequipped to deal with loss, hurt, or heartbreak. So we find salvation in other things.

Research has proven that smoking your sadness or torment away leads to smoking heavier and for more extended periods. By smoking heavier, I mean increasing the nicotine concentration. Nicotine consumption for dealing with anxiety or depression is a short-term fix, not a long-term solution. With every hit, your brain undergoes changes that enable it to look for more quick fixes of increased dopamine, causing you to “crave” cigarette after cigarette. For many of us, we don’t even consider it an addiction owing to the legal and widespread use of tobacco in so many other variations. These addictions are the deadliest. Smoking can also give rise to mental health issues such as increased anxiety and depression. This is why it can become complicated to quit smoking.

Sometimes, grief is inevitable. You can suffer the most significant loss but also be suffering in silence. Using other ways as a medium for ignoring all that is troubling you. However, the worst thing you can do for your mind is taking your body down with it. Sometimes, we only need one to keep working on trying to heal again.

By all means, this is not a step-by-step guide that if you follow, you’ll magically end up quitting. However, this article is to help you understand and weigh all the risks for smoking to alleviate anxiety or depression because that doesn’t happen. If you’re suffering from either of these mental health issues, proper therapy is always the best way to start.

You can use smoking as a coping mechanism, but it won’t help. When you attempt to stop smoking, it will bring up all the uncomfortable and stressful memories or conversations you tried to suppress. If they are coming up, you need to learn to exist in the same space, so working through them is more straightforward. One of the best things you can do is to see a counselor or a group that allows you to talk about all the thoughts you’re having in a safe space. If you’re in therapy, you will get the urge to smoke a cigarette while you’re discussing your problems, and in some cases, people will take the route. Counselors will often leave this discussion on the back burner during therapy sessions waiting for the right time to bring up quitting.

Counselors who act through cognitive behavioral therapy or similar psychological treatments can address nicotine addiction adequately as they are accustomed to looking for advances in a person’s behavioral changes.

Journaling has been used as a complementary treatment for therapy for people who suffer from anxiety and depression. It can lead to a breakthrough in mind and bring forth our past traumas, fears, and anxieties that end up causing these mental health issues in the first place. Journaling also provides a safe place for people to pen down their thoughts and fears and be honest with themselves. It requires minimum effort and consistency. It can help you map out all the different ideas that encompass your mind and can help you navigate through them. It is a great way to keep track of your progress and recovery as well.

Starting a “Quit Smoking” journal is a great way to start your journey towards healing. It will surely be helpful during the withdrawal symptoms. Putting down the reasons you reach for a cigarette in the first place can tell you where you stand and how much effort is required to put forth towards your healing. Do not underestimate the power of words. Sometimes they are all a person can live by.

If you’re an addict and are trying to get better, it is essential to remain motivated but at the same time realistic about the reasons why you need to seek help in the first place. It can only be an advantage to you if you never lose sight of your perspective. Be patient and kind with yourself, and remember that recovery is an everyday battle. Your recovery is what should matter most to you, and the people that love you will understand that.