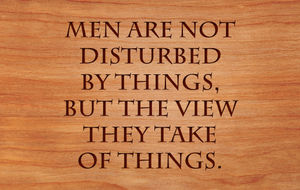 How to Stay in the Moment with Stoicism

Part of what makes Stoicism fascinating to examine is the fact that three of its most well-known practitioners represented a wide spectrum of social positions. Consider Marcus Aurelius, the Roman Empire's emperor and one of the world's most powerful figures. Consider Seneca, an emperor's adviser, a renowned playwright, and one of the Roman Empire's wealthiest people. On the other hand, Epictetus, born into slavery, is the polar opposite. Stoicism is so powerful: it can provide timeless idea... Stoicism: 7 Days to Mastering the Stoic Art of Journaling

Our story begins with Zeno of Cyprus, son of a merchant and a merchant himself. On one of his trips transporting purple dye from Phoenicia to Peiraeus, fate had other plans for him. Shipwrecked in Athens, he decided to bide his time in a nearby bookshop, as one does. He found works from some of the most influential and prominent philosophers of his time. Just like many of us with our first interaction into the intrepid and mindboggling world of philosophical thinking, he was hooked.

JOIN A CHALLENGE     Thought-provoking expressive writing
This website uses cookies to ensure you get the best experience on our website. Learn more
Got it!
Powered by ProofFactor - Social Proof Notifications